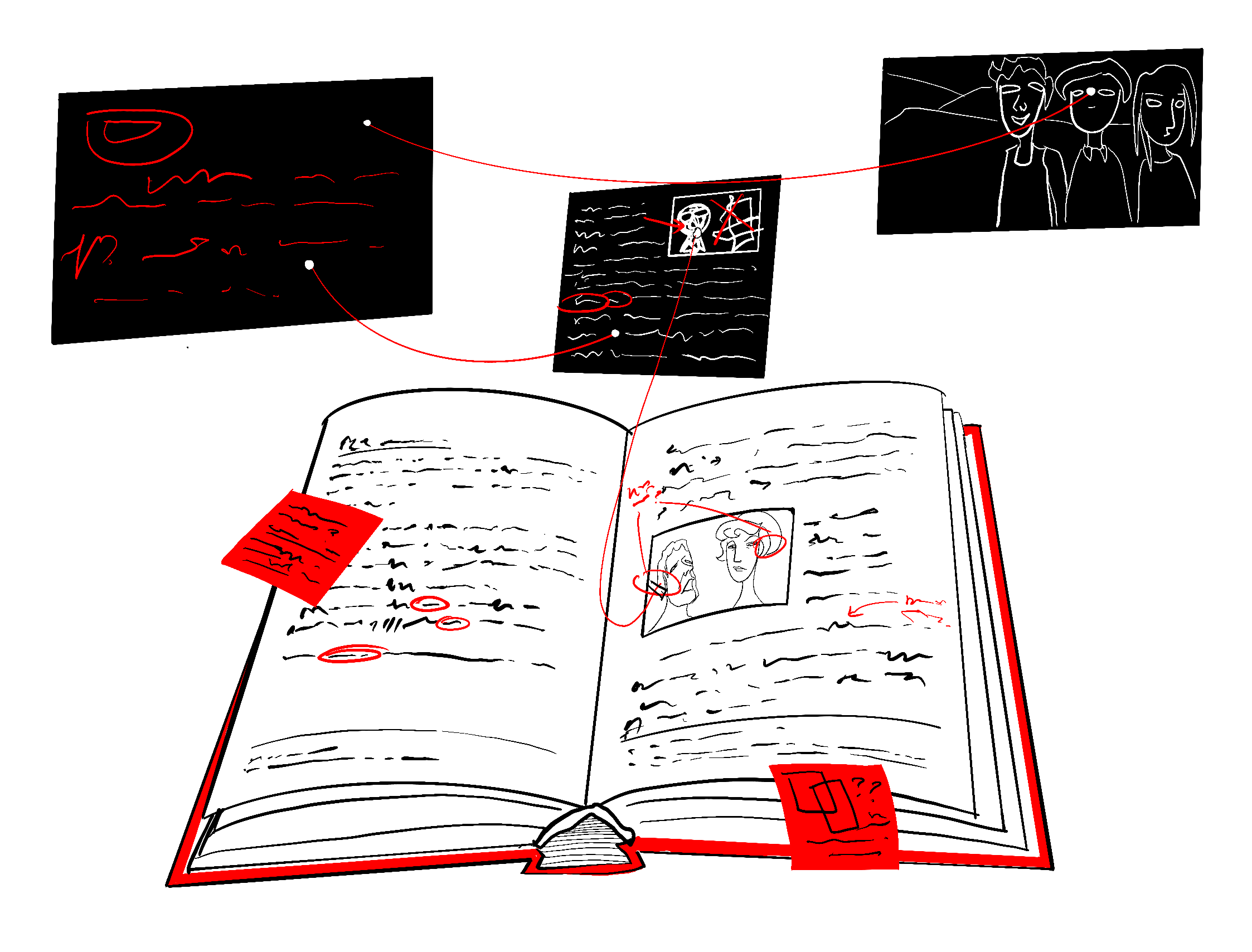 Let’s get this out of the way–I’m sure there are other more interesting things to compare-contrast about the two works and I’m sure enough English major blood has been spilt on them already. I’m going somewhere else with this, somewhere I’m mildly qualified to venture.

Infinite Jest has sections of endnotes longer than other independent novels1. They are not peripheral, they are structural–load-bearing notes2. At times they function to structure the massive amounts of exposition the book contains; if it weren’t for the quality of the prose (and careful tonal significance of every detail), the work would buckle under the weight of all the explanations it requires. While there’s plenty of Tell left in the main text along with the Show, the endnotes serve to structure the details you need clarified. This allows the main text to amplify the humor of a ludicrous detail of setting by mentioning it matter-of-factly, with the reader able to scurry to the notes for initialisms and explanatory asides. The main text contains digressions, too, and tonal whiplash; here also the endnotes lift some of the weight of these off of the main sequence.

House of Leaves centers on a documentary. One author discusses the documentary as though it might or might not have been a hoax, and refers to voluminous scholarly work surrounding the documentary. Then another author comes in asserting that the first author’s text is the only thing ever to have referred to the existence of such a documentary, and its explicit citation of even celebrity opinions thereon is all made up. This second author chronicles in the footnotes something like a mental break owing to his compilation and annotation (and at times, manipulation) of the first author’s materials. Meanwhile, a whole chunk of the book plays with formal presentation of the text with footnotes referring to footnotes on the same page, blocks of text arranged in a spiral, text printed in reverse on the back of text…

We see a few threads here:

So if these are the literary effects of footnotes in my coincidence-picked examples,

how do these effects follow from the ordinary use of footnotes?

The first use is already brimming with potential for fiction even without getting too metatextual. Anyone who ever shoots the shit with their friends can attest to how a good story may contain slightly non-linear digressions from a principally linear narrative. The footnote is a natural home for the sly aside or catty remark, and it sees this use in fiction–think Terry Pratchett–and academia both.

Citations are kind of wild, if you think about them. On one layer, they say: This is how you may check my work. I made a claim, and I am basing it on something outside of this work, and this is how you may find it3. On the other hand, it’s easy enough to point out examples of how miscitations spread (spinach, sleep). Authors think they can get away with this because they do. This is what should make us suspect that despite “check my work!” being the purpose of citations prima facie, this isn’t actually something the writer expects the reader to do most of the time.

So let’s look at it, then, as rhetorical technique.

Citation, particularly around prior work, confers a sense of authority on the citer–“you know I must have done the reading to come up with all these page numbers” and the cited–“these are the thoughts and opinions on the topic that I believe are worth paying attention to”, aspirationally situating the citing work among the cited. Because academia is a deeply weird place, this has all created a world wherein citations create a directed graph structure that people actually care about. There aren’t many of these4.

Citation with comment elaborates on this graph, creates attributes on these relations of notes. The comment can be used to counteract the assumed purpose of the citation: you can say someone’s full of bullshit in whatever dry form your publisher finds acceptable, and that citation will excoriate them even while directing more attention and legitimacy their way5.

So to sum up: you have to hold more than one thing in your head with a footnote. Your brain has to do the thing you do with your finger when you point at different parts of the screen to cue your relative in what order to read them to explain what you were laughing at. Your brain has to scan forward and backward for context, probably like that last sentence. You have to be aware not just of the text, but of the world outside the text, and the world of texts outside the text.

is there anything in the digital world that can compare to the footnote and elevate the form? if so, what?

Unfortunately, the least semantic link of all is the raster screenshot of “what I saw at a particular moment in time”. It has fictive potential mostly because it apes familiar form–here’s someone’s jokes about the Avengers’ group text, ah, yes, this is what my group texts look like also. Unfamiliar form, though, ruins this–and because interfaces are constantly shifting, if the interface screenshotted isn’t exactly the one the viewer knows, it produces the opposite effect. It’s also frustratingly static, like a photocopy.

Memes (“you mean image macros”) are an incredibly referential form. Look at knowyourmeme–you have to trace the etymology of these things in order to have a hope of understanding their contextual implications. But the very thought of fiction trying to leverage the form is… Well, if you’re from the generation that grew up with these things, you’re probably cringing at it just like I am. The interesting art I can imagine around this would have to mock an entire image board or link aggregator, with faux comments sections, and the bulk of the effort would probably have to center on those comments, and oh yes this already exists, I remember after writing this.

Technology allows you to create all kind of hyperreality, but in order for something to rise to the level of the footnote’s potential in fiction, it has to be in common use. Does the modern Web have anything like this? Algorithms do our situating for us based on our behavior, and the results are known only to the social media companies. Twitter’s recommendation algorithms for people to follow are useful, but opaque. I cannot curate what people will be recommended to follow as a result of following me. This curation is the behavior that would be of interest for metatextual fiction, and it died with the old web6.

The best example of digital transformation of citation-like use has been seen at Buzzfeed. Buzzfeed has a habit of monetizing collections of Tweets. The typical example of the form sees a sequence of them among more-or-less unimaginative headers. While this is all perfectly legal given the terms of service, it is typically considered good form for the author of such a compilation to request permission from the authors of the tweets. Inclusion in the list may, for example, direct a lot of strangers toward a tweeter who may or may not be prepared for their attention. This is all fine and normal. When permission is not requested and a tweet’s author realizes their work has been embedded contra their wishes, the tweeter may change their Twitter display name to some message or other that the embedded tweet will now display within the compilation of tweets on Buzzfeed’s own site. It’s happened more than once, but here’s an example. This is a small thing and irritatingly hemmed-in by the form of the tweet embed, but it’s the most interesting thing I’ve been able to think of.

Why not slip subversion in an iframe? Why not make one’s references dynamic instead of static?

Ah, the technical among you begin to shift your feet in discomfort. Security, you think. Performance. The reticulation of splines. But we users of the Web, we have already accepted all the technical compromise this idea risks in a different secondary purpose: advertising.

Advertising has been the grim lich lord animating the “content providers” of today’s Web for years, but if you think about it, it’s a little weird how its innovations haven’t fed back into the main column of the web. Must filthy lucre be the root of the trust relationship necessary to make back-and-forth dynamic embedding happen?

What can be done in this space?